Technological excellence from the very beginning

The company was established in 1977, when Mr. Erik Tingleff Larsen founded Weibel Scientific A/S. Larsen was convinced of the potential of Doppler radar technology, and he began to explore the potential of digital signal processing (DSP).

With his sights set initially on the U.S., Larsen saw a growing need to develop sophisticated radar systems for the tracking and measurement of airborne objects of all sizes and ranges.

The company was originally founded in 1936 as M.P. Weibel, an electronics company. The first forty years, Marius Peter Weibel, and his team focused mainly on optical detectors and established technical excellence as a core tenant of Weibel’s value system. However, when Mr. Larsen took over, the business scope changed to focusing on Doppler radar and DSP technology. 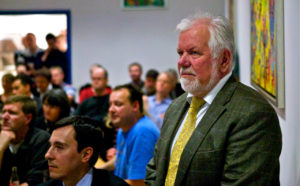 Breaking new ground (and air, and space)
The next era of Weibel’s Doppler radars began with the launch of the first Doppler radar system using fast Fourier transform processing and micro-strip array antennas in 1984. Over the next few years, Larsen travelled the U.S. far and wide. Finally, in 1988, determination and excellence paid off with the delivery of a tracking radar system to the U.S. Department of Defense.

Larsen was convinced of the potential of Doppler radar technology, and, building on the company’s pioneering work in optical detectors, he began to explore the potential of digital signal processing.

The development of new radar systems has allowed for expansion into new industry sectors, including the aerospace industry in 2000 and ballistic missile defense in 2012.

In addition to the headquarters based in Denmark, Weibel has a sales & service office in the US, and a development office in Norway.

Measured, steady growth
Through the years, we have maintained steady growth. Key company principles include developing a business based on close collaboration with customers and employing highly skilled and specialized staff. Today, most of our 300-strong workforce is based at company headquarters and development facilities in Denmark, led by CEO and President Frode Scott Nilsen.