Our equipment is used in critical defense situations that have a real impact on peoples’ lives.

We have an invested responsibility in our products. We are committed to providing technologies that will provide maximum benefit, whether on the ground, at sea, in space or in the air.

Weibel equipment is commonly used in critical defense situations, such as live battle zones. These situations have a real impact on the individuals involved, not only at the time, but often extending into their daily lives long after.

Danish Wounded Warriors was founded by the highly acknowledged Danish army veteran, Jacob Panton. As a Tank Commander, he experienced first-hand the extremities of battle, having been critically injured multiple times during his service. When he finally left active service, he felt driven to help other service personnel, recognizing the challenges that many face as they integrate into to normal society. 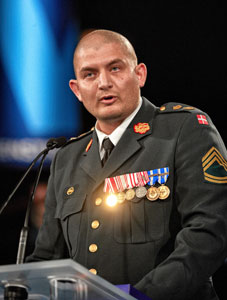 Realizing that he would need financial support to help establish the Society of Danish Wounded Warriors, Jacob Panton got in touch with Weibel to enquire about the company’s interest in supporting the initiative.

For Weibel management, it was an easy choice. We were eager to contribute in some small way to the lives of servicemen beyond their professional army careers.

This is why we have chosen to support the Society of Danish Wounded Warriors (Veteranskytterne).

As supporters of the Veteran Foundation (Veteranfonden), we sponsor the music festival Engage.